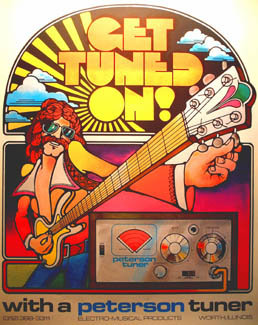 1.0 – How did you get your start in the music business?

I played with bands in the late 1970s/early 80s in Ireland, wound up in Hamburg, Germany in the mid 80s and started working as a crew member on tours. I toured with a variety of acts including Devo, Rory Gallagher, Nick Cave, Einstürzende Neubauten

2.0 – Peterson has quite a long and rich history, when did you first become aware of them and how did you ultimately become involved with the brand?

I used Peterson strobe tuners on the road always, no self-respecting roadie should be without one. All my peers used them. The challenges onstage during a show are many and varied, and you need to arm yourself with the very best tools to excel. Sometimes I see guys trying to get by with a needle/LED tuner and struggling with things like tuning acoustic instruments in deafening conditions, which is no problem with a mechanical strobe. It’s just about having the right tools for the job. I started repairing the older models for colleagues and through contact over the years with the factory in Chicago, built up a relationship with Peterson that led to the offer of a job in the U.S. a dozen years ago.

3.0 – The Who’s-Who of real touring artists know Peterson is the gold standard,  is it difficult finding ways to bring that message to new, less established musicians?

It can be harder because of the nature of the product; a tuner is a functional piece of gear. There are those who value an effects pedal like a chorus or delay more than a high end tuner, but they forget that tuning is crucial. It’s the building blocks of tone, because harmonic content is a vital part of tone, and the only way to influence it is by tuning as precisely as possible.

4.0 – Do you find it ironic that most of the early live recordings of folks like Hendrix & Zeppelin are often grossly out-of tune?

People sometimes say that but it’s not entirely true, people don’t realize that strobe tuners have been around since the mid-1930s and it was the advent of recording and the “Talkies”, not Rock ‘n’ Roll which spurred interest in tuning properly, by that I mean the first time attention was paid to overtones and harmonic content.

Hendrix, Led Zeppelin and even the Sex Pistols and the Ramones  had strobe tuners in their arsenal of gear.

In those days when actual Rock Stars walked the Earth maybe they didn’t always use them or were maybe too out of it to do so! Nevertheless, those artists did have an innate sense of what is “in tune”.

Being “in tune” is also open to interpretation, dissonance is as much of a sonic tool as consonance is, listen to any epic guitar solo and it is peppered (and sweetened!) with both. The trick is to be aware of which is which and why.

5.0 – In terms of live concerts, what’s the hairiest artist-related situation you have ever had to deal with?

Let’s see, dismantling part of a building in Moscow in order to “procure” instruments (scrap metal) for German industrial noise band Einstürzende Neubauten with the KGB style officials breathing down my neck or maybe doing a gig with a scantily clad Nina Hagen in a maximum security prison would probably count.

6.0 – I imagine you have fielded strange requests from artists over the years as a roadie and at Peterson?

As an ex-roadie my lips are sealed (Ancient Order of The Road forbids it :-).

At Peterson, plenty of strange requests, a tuner for chemical silos to indicate how much material was left inside (existing systems are apparently not very good!).

A request for a tuner for suspension bridge tensioning (!)

At the recent Royal Diamond Jubilee in the UK, the eight bells adorning the prow of the Queens barge were tuned using a Peterson Strobe Tuner.

7.0 – You have quite a guitar collection, any favorites you could never part with?

I have a 1977 Gurian JM that I’m very fond of, and a 1956 Gibson LG1 that’s got quite a charm to it, I also have a couple of ‘70s Guild twelve string guitar that I like. At Peterson, we use a wide range of instruments when creating our sweetened tuning presets and we often include our own personal instruments.

8.0 – If you could program Star Trek’s Holodeck with a couple concert settings you lived, what would the menu look like?

Leipzig, Germany Oct 25th 1989: On tour through East Germany (or GDR as it was known then), with a bunch of artists. The lead singer of one of the bands coyly wishes the audience “all the best for the future”, and is met with silence, then one handclap, then two, then three, erupting into a standing ovation. A few days later, the Berlin Wall falls.

Hamburg, Germany March 31st 1990:  Standing beside Jerry Lee Lewis after delivering the “piano du jour” for him to warm up on, when Jerry Lee says “boys, this is a fine piano, some day when I got the money, I’m gonna buy me one o’ these”. My crew buddy Jed glances at the stacks of dollars in the room which JLL insisted he be paid in and pipes up “the money lying around here would do fine as a down payment”. Happily we got out alive without JLL taking umbrage.

Hamburg, Germany Oct 24th 1990:  Dizzy Gillespie sits down beside me at the back of the stage by the dimmers, looks at the band, looks at me and says “Ain’t that a heck of a band?” It was his own band who he often allowed to “stretch out” by leaving the stage to them, a generous guy.

Paris, France 18th Dec 1992:  Rory Gallagher playing up a storm, blows his amps up, which trips a circuit breaker taking out the entire PA. Rory switches to acoustic guitar and plays unamplified to a hushed crowd, until some unfortunate individual exits the restrooms via the very squeaky door, cue the entire crowd looking around to see who the heretic was!

Osaka, Japan July 8th 1993:  Explaining to a frightened stage manager that no, I didn’t need any hi octane fuel to power the tuned jet turbine used on the set of Einstürzende Neubauten and no, we didn’t need to set the stage on fire like last time……………

9.0 – How do you feel about the auto-tuning phenomenon?

I think it has its place, but there are so many people using it without any knowledge of or regard for proper intonation and temperament theory (you cannot tune everything as you would a guitar) and that’s why it sounds so artificial even when used sparingly. If you’ve ever tried to make a keyboard sound like a horn section, the same problem arises.

I can always hear it, it’s very easy to detect and differentiate from naturally in-tune recordings.

I guess I should say I’m more a fan of the preventative (tune and intonate properly when recording) rather than the curative (fix it later).

10.0 – Sound analysis is crucial in testing architectural stability for the world’s most ambitious structures and it has been postulated that sound was the secret to the building of the pyramids; is sound the most powerful force in the universe?

I would say that sound is all pervasive.