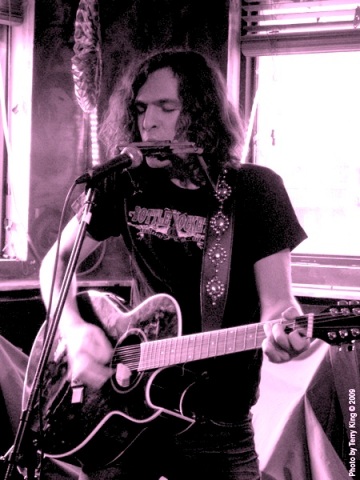 1.0  How was it recording with Eric “Roscoe” Ambel? Recording with Roscoe was a great learning experience. As a producer Roscoe demands a lot, but his results speak for themselves. It was a real challenge to step up to his expectations, and that caused a lot of growing pains. But it was for the best. I’d wanted to work with Roscoe for years, and since I moved to New York in 2001 I slowly got to know him; hanging out at his bar, the Lakeside Lounge, and going to hear him play. He’s one of those guys with the Midas Touch. Whether it’s his work playing guitar with Joan Jett or Steve Earle, his playing in bands like Del Lords, the Yayhoos and his own group The Roscoe Trio, or bands he produced like the Blood Oranges, the Backsliders and the Bottle Rockets; everything Roscoe touches turns to gold.  Roscoe sees projects on a macro and micro level. On the micro level, he’s got a great sense of what sounds need to be where; what parts of songs need guitar licks, what tracks need an overdubbed acoustic guitar with Nashville tuning, where a harmonica break fits, etc.. On a macro level, he’s always got his eye on the big picture like how to make the best use of studio time, the order that songs should go in, how to tell players to prepare and a whole lot more. My background is in writing for newspapers. I liken Roscoe to an excellent editor.

2.0  How does the new CD “Hello Disaster” differ from your debut “Heathens Like Me”? First and foremost, Hello Disaster was produced, unlike Heathens Like Me. It took four fun days to make the first record. It took three hard years to make the second. The first record is the sound of a band coming together, going into the studio and just bashing out the songs. The second record, to me, is the sound of a band busting apart. But the sound of the shattering is pretty glorious.

3.0  What’s up with the New Heathens? I don’t want to air dirty laundry, but some of those growing pains I mentioned led to us stopping performing out as a band midway through making Hello Disaster. We had been going pretty strong there for a couple years, hauling up and down the eastern seaboard in a big, purple van, but we hit the rocks in the studio. It was painful. It wasn’t how I envisioned it – and believe me, I had meticulously planned this project for years and worked my ass off – but I came to a fork in the road during the recording process where I could salvage one of two things: the band or the record. I chose the record. Note that the record starts out with five people wailing together in a room, and ends quietly with me by myself. That’s a good metaphor for how the recording process went. I find myself in the curious position now of trying to promote a good record by a band that isn’t really around anymore. I’ve been playing plenty of solo acoustic shows, difficulties of promoting a full-band record as a solo acoustic artist be damned. Don’t be surprised to see some “Nate Schweber and the New Heathens” shows soon.

4.0  What sort of music did your family listen to growing up? My mom is the partially-reformed pseudo-hippie of the family and she’s a huge music lover. Growing up she I remember her playing the Beatles and Emmylou Harris, who looks like her sister. She was the one who turned me on to the Rolling Stones and Steve Earle. My dad, a self-proclaimed “bean-counter,” actually has great taste in music, though I didn’t realize it when I was younger. I learned about Warren Zevon from my dad.

5.0  What was the first album you ever purchased? Aerosmith’s Pump. Power ballads be damned, if anybody’s recorded a cooler song than F.I.N.E. in the past 20 years, I ain’t heard it.

6.0  Does being from Montana originally have any impact on your style? I’m sure it does. Montana has wide open vistas and not a lot of people, so growing up I had wild, fanciful notions of what I wanted to do with my life and not a lot of people to tell me I couldn’t. I noticed a definite change in my mindset when I got to New York and found myself hemmed down at the bottom of concrete canyons all day (lo and behold some of those “fanciful notions” didn’t quite work out). Montana also affected my taste in music. The Pacific Northwest has a psychic connection with the south, I imagine because they are both big, rural areas where agriculture dominates. So things like country music and southern rock resonate up there. Growing up a weirdo, I figured out fast that a lot of the chaw-dipping, wrangler-wearing guys who cranked modern country in their pickups wanted to kick the shit out of me, so in high school I hated country music. It wasn’t until I got to college that I luckily fell in with a hip, bar-band scene who turned me on to country that was Stonesy, relevant, smart and cool, like Steve Earle, the Bottle Rockets, Todd Snider, Doug Sahm and the Supersuckers.

7.0  Did you have a band in high school/college? what did you call yourselves? what did you play? I sang in rock bands all through high school and college. Some names I remember include, “Blue Monday and the Cockroaches,” “The Spice Boys,” “Aces & Eights,” and “Moxie.”I played tuba in school band from fifth grade through when I graduated college. To this day the longest lasting and most popular band I was ever in was a German polka band that spanned elementary school through college called “The Hungry Five.”

8.0  Why did you move to NYC? I tell people that having grown up in Montana, I wanted to find out what life in a big city was like, and boy have I found out. The catalyst was I got an internship at Rolling Stone magazine in 2001. I came to New York to see what I could do in journalism and rock ‘n’ roll.

9.0  How do you approach song writing? That’s a tough one. A lot of my favorite songs are what I like to think of as “smart.” Like “Lawyers, Guns & Money” by my man Warren Zevon, it’s a wild concept for a song, totally original hook, fantastic riff and it’s funny. Zevon is a master at that. Same with Brian Hennemann of the Bottle Rockets, particularly when he co-writes with Scott Taylor. Their songs “$1,000 Car;” “Welfare Music,” “Zoysia” and a slew of others are new, smart, descriptive ways of looking at common things. So that’s always my goal when I try to write a song. I usually fall far, far short.

10.0  What do you prefer – writing, recording, or playing live?  It used to be playing live, because that’s all I did. As I get more experienced at writing and recording, I’m enjoying them more and more.