I discovered mom and dad’s record collection at an early age. They had at least 100 or more albums. I wore out my first Sears black and white suitcase turntable since I figured out how to use it .I must have been at least 5 years old when I was using it on a regular basis. I am pretty sure I fell in love with rock and roll when I heard Elvis Presley for the first time. I think it was “Love Me Tender” or “Jailhouse Rock”. I listened to a really wide variety of music. Elvis, Nat King Cole, The Monkees, The Godfather Soundtrack. I discovered The Beatles on my own. My Mom ,Dad and Grandma bought all my music when I was growing up. Every Sunday we would do the family thing and kill the afternoon at the shopping mall. The family would split up and I would get lost in the record store checking out all the music in the store until they dragged me out. Fortunately ,with another Beatles album under my arm.

2.0 – Does the inspiration come from the same place today as it did then?

A lot  of my inspiration has come in random creative spurts of twenty minutes to a few hours at a time. My biggest fear is to dry up creatively. I have always thought of my musical gift as an antenna. I keep my mind open to receiving the melody that finds me.

3.0 – What records did you play along with as a kid?  My favorite records to play along with were Elvis, The Beatles, The Monkees and lots of top forty radio hits of the day. I still go through phases of listening to songs over and over again to pick apart arrangements,lyrics and production value. I am still a student of hit songs.

4.0 – How has the Chicago rock scene changed since you and Zac started Gidgets Gaga in 1999? 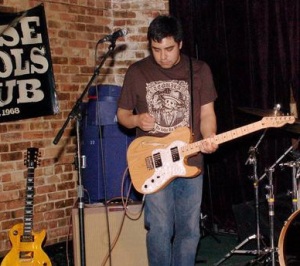 The Chicago rock scene is has gotten better and worse in diffferent aspects. There are better venues to play in the city than ever before. Great sound systems and good sounding rooms, but with that gain their are more clubs that do not want to pay the talent. Couple that with cover bands and the sheer number of original bands and it can make it much more difficult to ferret out the cream of the crop. Great music can get buried by those factors. We have learned to branch out more now. We constantly create multiple income streams to make a living via music licensing,merchandise and the occasional ponzi scheme.

Ah, yes we are working on a new ep titled “The Night Is Young”. We are making a major label quality recording on our own without major label financial backing. And it is taking a long long time. I am really pleased with the results thus far. The end result will definitely be worth the wait for our fans.

6.0 – How do you guys approach writing? (has it changed from when you started?) Songwriting is the most fun of the process.I am a stickler on the arrangements of our songs. Our arrangements sound decievingly simple but there is quite a bit of musicianship in them. I ‘d like to think we are getting better at writing.performing and recording.Some songs come really quickly while others need love and tweaking.

7.0 – What usually triggers a tune for you? a riff, a melody, a subject, a situation, a phrase someone says? Usually, it is all of the above. And most of the time the inspiration comes at the oddest times like when I’m on the can or in the shower. Sometimes Zac or Leslie will say something and I’ll end up using it as a lyric.

8.0 – Is there a quintessential gig story that is dear to the band’s lore?
Best gig story ever! So we get a gig at a club on the southside of Chicago on a Wednesday night.I won’t mention the club. The important thing here is it could have happened at any club. I sort the details for the gig with (let’s call him) ‘Big Bird’ and score the band a great guarantee. The gig is set. We shake hands and speak a week before gig on the telephone. Handshakes still mean something to me, but as you will find out , it didn’t mean a thing to the booking agent. So far so good. We get to the gig with our gear and take an elevator up to the second floor  with all our gear. It’s decided right then and there we need roadies! We set up and rock the joint. This is the best part of the gig. We do what we do best for the 30-40 people who are at the club that night. What I did notice was a lot of drinking. This was a professional drinking crowd. All in all, its not a bad night but its not a great night. I’m talking more about the vibe of the club. The vibe doesn’t feel right to me. We play pretty well. I slip in some dirty jokes and we hit a few clinkers but no one seems to notice nor does anyone seem to care. I ‘m thinking the band may very well be winning the crowd over. Every club date is an adventure with bar staff, patrons and lets face it some outta hand drunks. Tonight, there are no tomatoes, no hecklers, no cuts and no bruises. Our four hour gig is over without incident. We do a little after the gig shot. Think we even did a little dance. Time to get paid for the night. The guarantee was a righteous booty, a real score for indie rockers writing and singing their own tunes. At least we didn’t have to play any covers! We’ve managed to avoid playing any covers by playing acoustic versions of all the songs as well as full on electric versions. But for, the record, we butcher other artists material at rehearsal for shits and kicks.

‘Big Bird’ is not at the club tonight. It’s his night off. I speak to the bar maid working behind the bar. She informs me the gig isn’t up! As in, we have to play till closing time if we wanna get paid. I am a bit tired but more irritated by this, but I put on an instant poker face. I think on my feet and have the bar maid call ‘Big Bird’ at home….feathers are ruffled as he was fast asleep, he informs the bar maid not to pay us unless we play till closing time. The problem with that was that is not what we agreed upon. The only two people who know the details of the gig are BB and myself. The bar maid hands me her cell phone and I hear  him rant – his redneck accent is straight out of the movie Deliverance. We’re all a little tired and my bandmates are restless and want to split . I catch the last thing ‘Bird’ hollers at me “Boy!.. you best let a dead dog lie! Or you’ll never play in this town again!” He slams the phone and hangs up on yours truly. So in a split second I think of what Joilet Jake (Belushi’s character from The Blues Brothers) would do at that very moment. What would JJ do? I pretend I’m still on the phone with him. The barmaid is 10 feet away she has no clue what I’m doing. I pull out my best Joilet Jake impersonation on BB: “We are so sorry about the misunderstanding about how long we were supposed to play.” Throw in some dramatic pauses for effect and continue a non existent conversation. I go on and thank him for letting us play such a cool club and  how everyone was so friendly. We have to book another gig. I catch the bar maids eye. I want to reel her in a bit to watch me work BB. I go on to say we’d love to come back and play and I m glad we sorted out the misunderstanding. I walk slowly toward the bar maid still on the phone and say “Big Bird, thanks again!” I hold my hand over the mouthpiece and tell the barmaid “Big Bird” says to go ahead and pay the band. I hang up the cell phone. She turns to the register and counts the money and hands it over to me. I put it in my pocket . I give the bar maid a wink , a smile and a thank you. Walk over to the guys and without missing a beat, I  smile and say “Lets get the hell outta here”! They know somethings up but I don’t have the time to fill’em in on what happened. My new problem is the bouncer standing at the elevator door. We have to get past him. Luckily, we’re a power trio,we travel light and I’m Mexican. We were packed and ready to head out in less than 5 minutes. “Big Bird” calls back – we’re at the elevator with all of our gear. The bouncer has to operate the elevator so we’re stuck. The bar maid is having a full on conniption fit. She knows she has been had. The bouncer has a little sidebar conversation with the bar maid. It felt like forever. The bouncer walks to me with the biggest grin on his face. It’s fight or flight and there is nowhere to run. He tells us he liked the band set and doesn’t care for “Big Bird.” He holds the elevator and helps us load out. The bouncer goes on to tell us BB has had a reputation of ripping off bands for years. I’m pretty sure the  bouncer was watching me the whole time on the phone but never let on. The bouncer was a pretty rough biker type and we made his night. He was happier than we were that someone finally got over on ‘Bird’ and I’ m sure the fact I was not a caucasion male made it even a bit sweeter. We unloaded the gear back home and called it a night.

In the wee of the night I heard the answering machine go off . The next morning I hear a drunk dialing angry ‘Bird’ try to form a sentence but all I can hear is some muttering about how we’ll never play in this town again. He was really drunk, totally pissed off and feeling a bit out smarted. You could hear it in his pained redneck voice and that, my friends, was priceless! We played that message over and over for weeks until it was accidentally erased. I think I peed myself it was so hilarious. The only regret I had was the message was accidentally deleted. We wanted to open the EP we were working on at the time with the voicemail. Note to indie musicians everywhere: Let my cautionary tale be a reminder to keep emails, voicemails and any other records when making gig arrangements. And as always, for those about to rock, we salute you!

9.0 – Westerberg stops by for smokes; what Gidgets Ga Ga tune do you pop on?

I ‘d let Westerberg pick between three songs:Dreamer, The Sorry Song and Forever and a Day. It would be great if he really did stop by to listen he is a hero of mine.

10.0 – Branding infringement aside, does Lady Gaga get kicked out for snoring? Musicians with Ga Ga in their moniker are most likely to be talented! Lady Ga Ga has written songs for some of the biggest names in the biz. She is the most talented in her genre of music for sure. I have to admit it I listen to all of her stuff my favorite song is  “Speechless.”